Bernie Bernard Jnr. remembers the day he received that dreaded email from Medfac. It stated that he, Bernie, the self-acclaimed light, honour and glory of the Bernard family, had just failed his EOC exam. As Bernie describes it, that moment was undoubtedly the greatest blemish in his perfect straight-A record, and a slap in the face to the high distinction he was expecting. “It’s hard to explain just how massive an impact it had on me,” Bernie says. “It wasn’t just about the blow to my hard-earned dream of becoming a neurosurgeon. It was also about the eternal guilt-tripping from my parents, the infinite disdain from my siblings. According to my calculations, this acute life event stressor alone increased my risk of cardiovascular disease by 49.5%.”

These were challenges that Bernie would contend with long after he received the tragic news. But that night, ruminating in his room while banned from the family dinner, one question dominated his thoughts – what had gone wrong? Bernie had done everything right –  he always did. He had watched all of his lectures at 2x speed and faked attendance at all of his online prac classes. He had made meme after meme. He had even streamed Grey’s Anatomy for 2 weeks straight, followed Doctor Mike on Instagram, meditated for 8 hours, ensured his daily 14-hour beauty sleep, and prayed with perfect piety to the Phase 1 gods. This was his homemade formula for success, fine-tuned to perfection over two days of Foundies study. How could it have gone wrong? 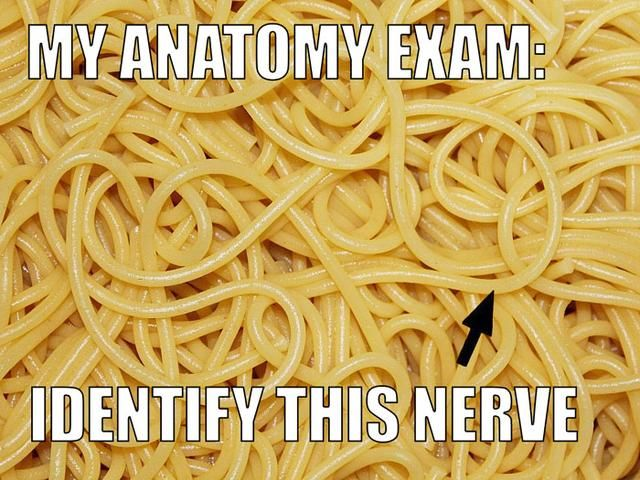 A meme plagiarised created by Bernie during his EOC study

It was around the time when dessert would have been served that the answer finally occurred to Bernie.

“It hit me like acute peritonitis,” he said. “Or maybe those were hunger pains.”

Bernie had deduced that the fault of his failure lay in Nach King’s notes. After all, he had carefully read through each page of King’s guide, even doodling all over the diagrams and adding his own genius annotations like “The mitochondria is the powerhouse of the cell” beside a completely unrelated diagram.

“It was impeccable!” Bernie says. “With such strong supporting evidence, I was forced to conclude that there must have been something inherently wrong with King’s notes in the first place. This fault would become the original sin of my medical career.”

The following day, the Jugular received the letter from Bernie that became the basis of this article. Bernie bravely told his story and worked to “expose the fraud” of Nach King, using his personal experience to caution his juniors against following his footsteps.

“DON’T TRUST NACH’S NOTES! HE IS A LIAR AND A FRAUD!” he writes repeatedly.

Bernie informs the Jugular that he has now adjusted his approach, and is sitting at home watching Netflix with Anita Blue’s notes in his hand. “I’ve ripped out all of Nach King’s notes and trashed all the files. Now that I’ve got Blue’s notes, I’m bound for success! I feel invincible and ready to take on the world,” he says.

When asked by the Jugular if there was anything else he would change about his study technique, Bernie replied that his current method was flawless. With such accurate and critical self-evaluation, the Jugular is certain that Bernie is on the right path to becoming an excellent reflective practitioner.

GET TO KNOW US

By Sarah Lin; Edited by Katerina Theocharous Kitty Dok, a 7th year student, has recently revealed that she is quitting her medical studies in order to devote herself to the art of TikTok. The Jugular conducted an interview to investigate the mysterious past of the new TikTok star. Q. Why

By Jacky Jiang; Edited by Rosie Kirk While the freedom to do what I want when I want is something that I highly value, this year has taught me that there is such a thing as too much freedom. I had no morning bus to catch. Lectures were all prerecorded.

By Thulashigan Sreeharan, Edited by Nipuni Hapangama On Father’s Day this year, the medical profession looked back at its estranged relationship with long-deceased dad Hippocrates (circa 460-375 B.C.).  Little is known about the founding father of medicine, but doctors are convinced he was a good dude. After all, he sowed

By Jacky Jiang; Edited by Nipuni Hapangama Having recently fallen into a slump and losing all the motivation I had to study, I’ve had to take a step back and reassess my situation.  Why have I been this way and what can I do about it? Of course, a lack

By Jacky Jiang You may have heard of the idea that the COVID-19 pandemic was orchestrated by Bill Gates – arguably the most influential philanthropist in the world – so that trackable microchips could be injected into everyone via vaccination. Or maybe you’ve heard that the implementation of 5G networks

By Sarah Lin; Edited by Katerina Theocharous Have you been introduced to BBCollab? That’s right, the hottest online teaching platform of choice! Are you having trouble navigating its fluid and powerful controls? Feeling intimidated by its high resolution, cinematic sound quality, and stable connection? Don’t fret, The Jugular has you

By Jess Sawang; Edited by Nipuni Hapangama Aboriginal and Torres Strait Islander people are advised that this article contains references to deceased persons. The year is 2020. We are in the middle of a worldwide pandemic and have been for a few months now. But there is another pandemic, one

By Thulashigan Sreeharan; Edited by Nipuni Hapangama The past few months have been a mix of idleness and turbulent upheaval. They have reminded us of the uncertainty in existence and death’s finality.  As soon-to-be doctors, we will have to accept defeat in the war against death – but what exactly

By Jacky Jiang; Edited by Nipuni Hapangama We’re all familiar with the phrase ‘money can’t buy happiness’. Teachers, self-help books and even ‘successful’ entrepreneurs seem to love drilling the idea into our heads. There is, of course, validity in their words; they encourage us to pursue a career for fulfillment

By Anonymous, Edited by Katerina Theocharous Dear Corona, You’ve had me reeling through a cocktail of emotions these last couple weeks. When I first laid eyes on you, I was spellbound by those luscious curls of RNA and infectious looks. You were so well-travelled and talking about the celebrities you’d

By Thulashigan Sreeharan The Jugular is committed to providing up-to-date news during these uncertain times. UNSW is now seven days into lockdown, and as Wally looks emptier than most MedSoc council meetings, we decided to do some House style sleuthing into what our students are up to. Our finest reporter

By Shaddy Hanna What is it about our current situation that leaves us so unnerved, so disturbed, and so perturbed? Is it our lack of control? Is it the overwhelming sense of insecurity and instability? Or is it the fear of the unknown? I’m sure it’s many of the above,

By Sandra Goria “Dreams and Disillusionment in Medicine” Writing Competition Winner “Beauty is truth, truth beauty,—that is all Ye know on earth, and all ye need to know.” – John Keats, Ode to a Grecian Urn  Two days before the start of my first day of Medical School.  We sat on the

By Jonathan Cheng “Dreams and Disillusionment in Medicine” Writing CompetitionRunner-up Present In an almost autonomic fashion, Stefanos stared down the bottom of his glass pensively before draining its contents. He delicately lay down the glass next to empty bottles of Penfold Grange of various years in the 1950s. The whiteness

By Brian Feng Everyone has things they love and hate. Just using food as an example, I was shocked by the blasphemous nature of a conversation I had with my friend. F: “I don’t eat sushi because I hate seafood.” Me: “Why would you hate seafood?” F: “It’s just slimy…and

By IVAN SHEN To the class of 2025, I write this letter to you to first congratulate all of you for finally fulfilling your dream. Strangely, while getting into medicine can feel somewhat like the finish line, it really is the opposite; it is the start of a journey which

By Hannah Yuan; Edited by Katerina Theocharous This piece was written on 27th June 2021, at the onset of the current NSW lockdown. Given the recent extensions of the lockdown, we believe its messages are now even more relevant. ~~~ “Like swallows, like salmon, we were the helpless captives of

FAIR IS FOUL, FOUL IS FAIR – A Commentary on the Silent Modern Day Killer: Societal Apathy